Biodiversity and Biogeography of Marine Meiofauna

Meiofauna are small animals found in sand, including some entire phyla (e.g. Kinorhyncha and Gastrotricha) and major clades of other phyla (e.g. Platyhelminthes, Arthropoda, Annelida, Nematoda).  In nearly all marine sediments, nematodes are the most abundant and diverse members of the meiofauana.  I am currently collaborating with a number of colleagues in a project funded by the Smithsonian Institution's Marine Science Network to explore spatial and habitat patterns of meiofauna diversity.  The project is led by Jon Norenburg of the Smithsonian's National Museum of Natural History (NMNH).  We are using both morphology and DNA barcode data to document meiofauana diversity at sites in Belize and Panama.

The Smithsonian NMNH maintains a marine laboratory on Carrie Bow Cay in Belize. This one acre island sits 10 miles offshore on the Mesoamerican Barrier reef.  In January of 2010 I joined 5 other meiofauana experts for 2 weeks of meiofauna collecting on Carrie Bow Cay.  My Mexican colleague Alberto de Jesus Navarrete and I are currently compiling a preliminary checklist of the marine nematodes from Carrie Bow Cay from this and my prior collecting efforts there. 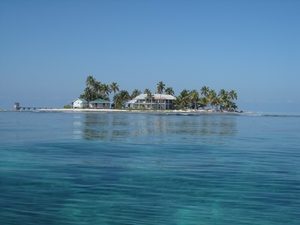 I have also made several collecting trips to the Smithsonian Tropical Research Institute's (STRI) Bocas del Toro marine research laboratory on the Caribbean coast of Panama.  As part of my marine meiofauana biogeography collaboration, my colleagues and I conducted a Meiofauna Diversity and Taxonomy Training course at Bocas del Toro in June, 2010.  This workshop was sponsored by the Smithsonian and the Encyclopedia of Life.

My Hamilton College students and I are working to characterize the nematode diversity from this island and surrounding archipelago to contribute to STRI's growing on-line species database for Bocas del Toro.  In the summer of 2010, my students mounted over 1,000 nematodes on slides and fully imaged 60 species, with detailed images of head and tail regions and reproductive structures needed for identification.  One sample database entry can be seen here.