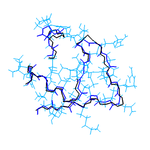 Welcome to the Van Wynsberghe lab! Our lab is working to understand the underlying physical and chemical principles biological macromolecules use to achieve their variety of functions. In particular, we study the fundamentals of both intramolecular protein dynamics and intermolecular protein-ligand interactions and their effects on biological activity.  To aid us, we use theoretical and computational tools, primarily classical simulation methodology. Since we are based at a primarily undergraduate institution, Hamilton College, the majority of our work is carried out by undergraduate researchers.  Enjoy some of their figures in the left column or on our research page, and see our fantastic high performance computing facilities hosted both at Hamilton and as part of the MERCURY consortium.  If you have questions about our work, don't hesitate to contact us!

AVW presented the group's work in a seminar entitled, "Multiscale modeling of the complete ligand binding pathways to influenza neuraminidase.". AVW was an invited speaker in the Physical Chemistry division's symposium "Physical Chemistry Research at Undergraduate Institutions." See the story on the Hamilton news feed soon.

Group Member Kalvin Nash's '18 work on the binding pathways of zanamivir to neuraminidase was featured on the Hamilton College website with a story and a great picture (credit to Nancy Ford)! Congrats Kalvin! 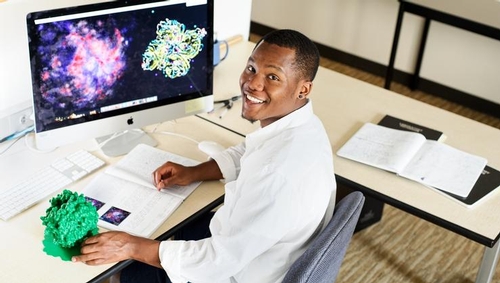 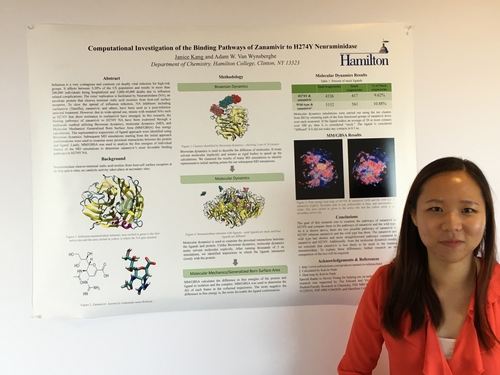 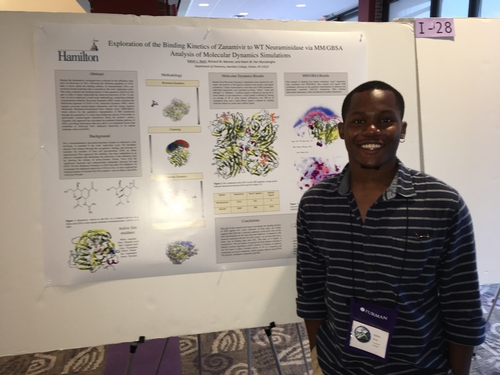 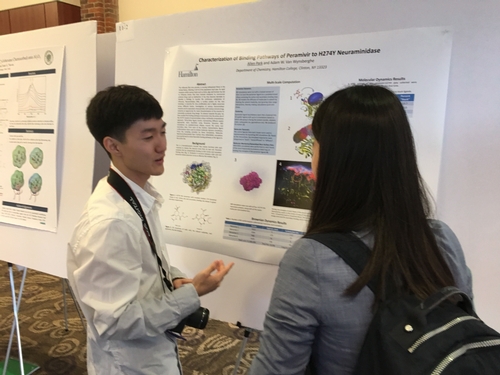 Two group members graduated with the Hamilton College class of 2017: Mia Kang and Rich Wenner! Mia will be working in Austin as she prepares for medical school and Rich will be working with OpenEye in Santa Fe this summer prior to joining Wayfair this fall to do web development work. Congratulations and best wishes from the AVW group!

Congratulations to Erin Lewis '18 for being recognized for her work by the Computers in Chemistry division of the American Chemical Society (ACS).  Erin won an Undergraduate Poster Award, one of five given out of roughly 60 undergraduate poster presentations in the COMP section of the 253rd Meeting of the American Chemical Society. Erin won a check for $100 dollars and a credit of $150 from Wiley Publishers. Nice work Erin! See the full story on the Hamilton News feed here. 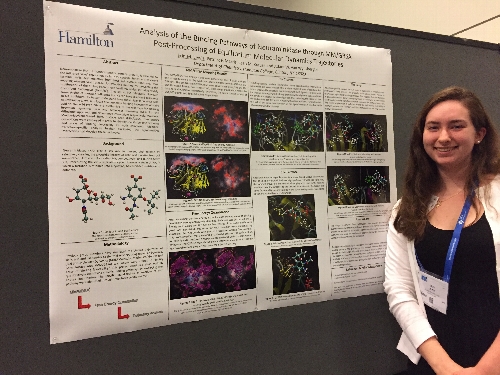 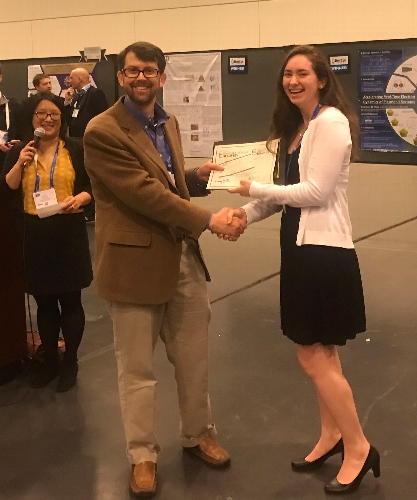 Four of the group's members travelled to San Franciso to present at the 253rd National Meeting of the American Chemical Society. David Dacres '18, Mia Kang '17, Erin Lewis '18, and Rich Wenner '17 all presented posters in the COMP section on Tuesday night. They were part of a large contingent of Hamilton Chemistry department students (13!) and facutly (5) attending the largest ACS Meeting (nearly 19,000) ever held.

Two new students, Allen Park '18 and Janice Kang '20, have recently accepted offers to work as research students in the lab for this upcoming summer. They will work alongside returning student Kalvin Nash '18. Welcome to Allen and Janice!

AVW presented the group's recent work as part of the Syracuse University Department of Chemistry's seminar series. It was the first public presentation of the free-energy quantization work of Erin Lewis '18 and Pat Marris '16. Other group member's who had their work specifically highlighted were Jeremy Adelamn '13, Alvin Wu '13, Dan Mermelstaein '14, and Leah Krause '14. See the story on the Hamilton News feed here.

The MERCURY consortium announced that it received a grant for $225,000 through the National Science Foundation's Major Research Instrumentation program! The funds will be used to support the expansion of the consoritum's high performance computing resources. Next summer's conference will be held at Furman University from July 20-22, 2017. See the official announcement  from MERCURY director and Furman Provost George Shields and the story on Hamilton's news feed.

David Dacres '18, Erin Lewis '18, Kalvin Nash '18 and AB Abera '19 all presented their summer research at the 15th Annual MERCURY Conference in Lewisburg, PA at Bucknell University. Below, Erin is shown presenting her work to keynote speaker and Hamilton almunus Rich Pastor '73. See the story on the Hamilton news feed here. 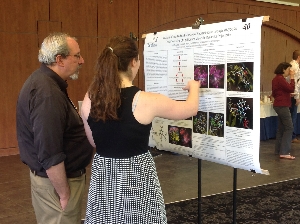 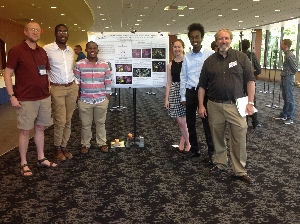 Welcome to our two new summer researchers, Kalvin Nash '18 and AB Abera '19! Kalvin and AB will be carrying out eight week long research projects this summer and presenting their findings at the 15th annual MERCURY conference July 21st-July 23rd. Kalvin is majoring in Biochemistry and French while AB will declare a concentration next year. Welcome to the group!

AVW discussed the lab's work in a seminar at Union College entitled "Development of a multi-scale sampling methodology to examine the favored ligand-binding pathways to neuraminidase." The seminar primarily detailed the work of Pat Marris '16, Leah Krause '14, and Alvin Wu '13. See the story on the Hamilton news feed here.

Congratulations to Bryon for winning  the Donald J. Denney Prize in Chemistry! This prize is given annaully to a student who excels in physical chemistry. Bryon was chosen for his excellent performance in both P-chem I and II, his physical chemistry research in the AVW lab, and his efforts as a grader for P-chem I. Congrats again Brian! See all the Class and Charter Day award winners here.

AVW gave a seminar at the 251st National Meeting of the ACS in San Diego entitled, “Development of a multi-scale sampling methodology to examine the favored ligand binding pathways of influenza neuraminidase”. This seminar was part of the PHYS division’s “Computer Simulations of Thermodynamics and Long-Time Kinetics of Molecular Events”.  The bulk of the work was accomplished by Jeremy Adelmen ’13, Alvin Wu ’13, Dan Mermelstein ’14, Leah Krause ’14, and Pat Marris ’16. See the story on the Hamilton College news feed here.

Former group member Dan Mermelstein ’14 was nominated for an award sponsored by NVIDIA for his work implementing constant-pH methods into the GPU version of AMBER. Dan is a graduate student in the Department of Chemistry and Biochemistry at UC-San Diego and is working jointly with Andy McCammon and Ross Walker. As part of his nomination, Dan presented a poster in a special portion of the COMP poster session at the 251st National Meeting of the ACS in San Diego. Dan’s poster was entitled, “Constant pH-replica exchange on graphics processors applied to beta-secretase 1 inhibitor design.” Although Dan did not win the award, it is a great honor to be nominated. Congratulations, Dan! 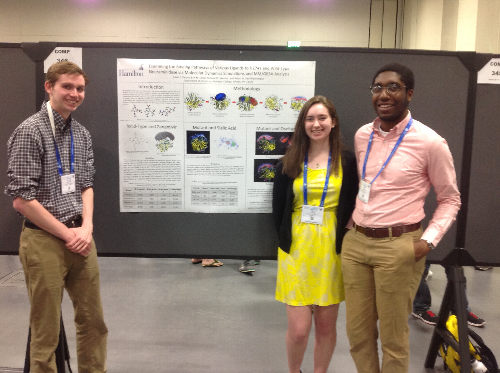 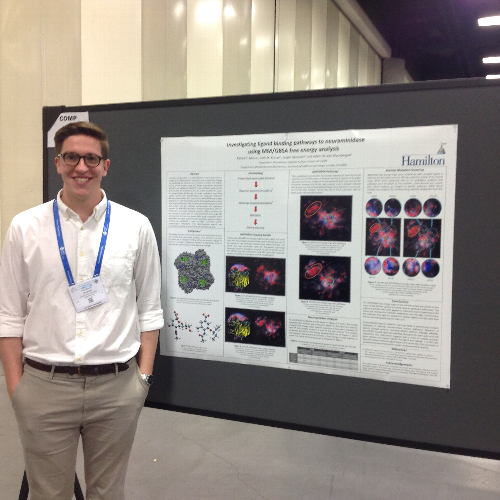 David, Erin, Pat, and Rich presented their work in poster format at the 251st National Meeting of the American Chemical Society in San Diego. Rich and Pat also gave short oral presentations at the UG workshop. See the full story on the Hamilton news feed here.

David, Erin, Pat, and Rich were all accepted into the UG workshop at the 251st National Meeting of the ACS! With their acceptance, their registration fees will be paid by the COMP division of ACS. The students will get to attend special talks by world experts in molecular dynamics simulations (Carlos Simmerling, SUNY Stony Brook) and quantum chemistry (Stephen Wheeler, Texas A&M), give oral presentations of their own work, and hear about careers in chemistry from a panel of scientists working in industry, academia and publishing. See the story on the Hamilton College news feed here and here. 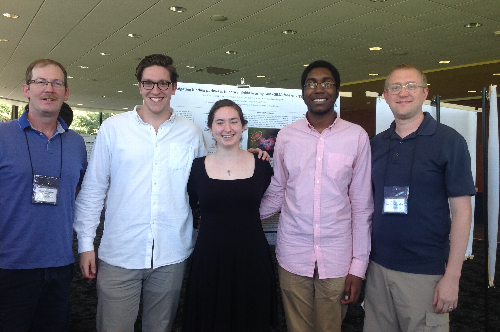 AVW receives tenure and is promoted to Associate Professor

See the announcement on the Hamilton News Feed here.

Jordan Graziadei was awarded the Donald J. Denney Prize in Physical Chemistry at this year's Class and Charter day celebration. Ths award is annually given to the student who excels in physical chemistry and is in honor of Professor Denney who taught physical chemistry at Hamilton from 1957 to 1986. Congratulations, Jordan!

Jordan Graziadei, Mia Kang, and Rich Wenner presented posters in the Division of Computational Chemistry at the 249th NationalMeeting of the American Chemical Society in Denver. See the full story on the Hamilton News Feed. 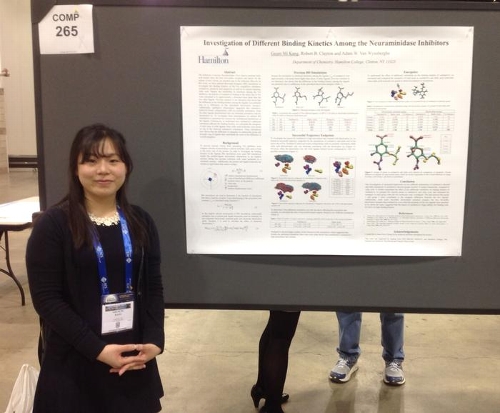 Mia Kang was invited to give her poster presentation at the SciMix seesion at the 249th national meeting of the American Chemiscal Society in Denver. Divisions of the ACS are only allowed to invite 10% of their most interesting and important poster submissions to the SciMix. Read the story on the Hamilton College new feed. Congratulations, MIa!

See older news in our archive